Photoshopped historical photos somehow bear immense value, both in the historical aspect, and in the field of photography and retouching. Some will say that this is falsification of historical facts and try on the people; others will look at it from a professional point of view. Today on the Internet there are many photo restoration samples that reflect those ancient times when it seemed that they did not hear about retouching. It turns out that they used to use retouch earlier and now if you look closely, you can see mistakes, but then people believed in it, especially if these doctored photos were widely distributed by the media and concerned public officials.

The name of the graphic editor Adobe Photoshop has long been an identifying moniker. Under the word “Photoshop” everyone means changing a photo, often with the intention of being hoodwinked or deceived. But people began to photoshop photographs long before the programs for image post processing appeared and even a long time before a personal computer invented.

Among the photos from official reports and propaganda media, fakes are greater than in humoristic publics. Here are the 10 most famous Photoshopped historical photos, where falsification of data is noticed.

In 2008, Iran published a picture confirming the successful missile launch but, apparently, something went wrong, one of the rockets did not start, and it had to be copied via Photoshop (note the two extreme rockets). 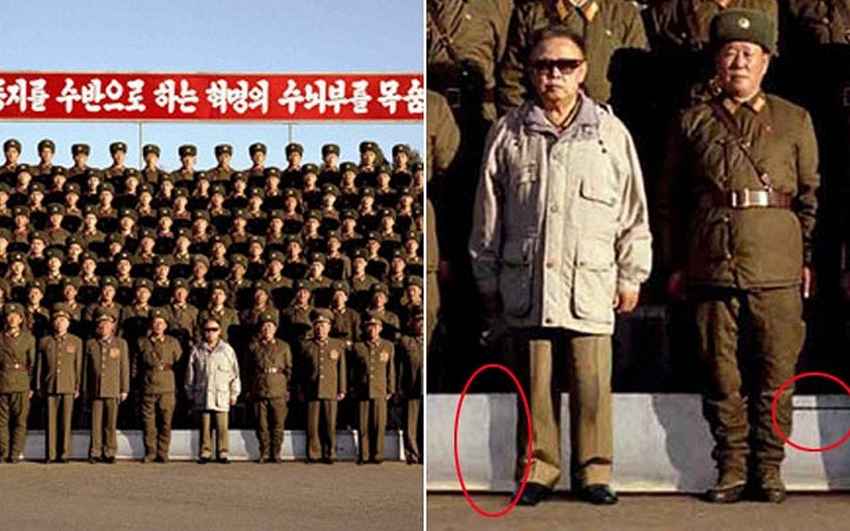 Photo of Kim Jong II and his army, made in 2008, was “Photoshop”. Pay attention to the shadows from the soldiers' feet and from the feet of the nation's leader. Kim Jong II, it seems, was initially absent from this picture.

This is the famous photo, which in 2001 allegedly claimed the “Photography of the Year” by National Geographic. As it turned out later, this is a collage from a picture of a helicopter made by Lance Chon, and a photo of a shark taken by South African Lance Maxwell. The collage has even a proper name   Helicopter Shark, as it became a network meme. This photo also got in the ranking of fun and famous Photoshopped images. 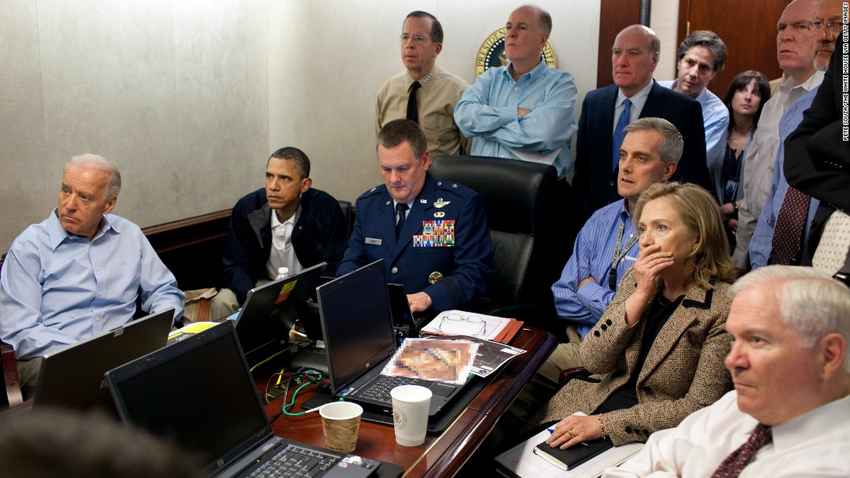 This photograph officially was published by the White House on May 1, 2011. We can see Barack Obama, Hillary Clinton and Joe Biden learn about the death of Osama bin Laden. The press relations service noticed on the table in front of Clinton a secret document only at the last moment so they pretty rudely covered it in Photoshop.

We can see on the left image the bloodied face of Osama bin Laden. But here is the archive image of the leader of Al-Qaeda, so this fake was concocted from two pictures. It is very noticeable that the beard and the lower part of the picture were most likely copied and inserted into a photograph of a dead body that does not belong to bin Laden. This image was the product of joining a snapshot of an unrenowned terrorist in 2009 and a bin Laden image of the 1998 model.

The classical illustration of the Photoshopped historical photos is the well-known portraiture of Abraham Lincoln, who was the first Republican President.

But on this picture only a head belongs to the manumitter of blacks. Other elements and parts of body belong to the US Vice-President John Calhoun, who was a militant slaveholder and a real southerner. What an irony! Calhoun was taken in the 1840s, and Lincoln's head was decorated with his photo in 1860. Probably, a nameless photographer was up against communications and instead of agreeing on a one more photo session with the president, decided to take up primitive Photoshop.

Other beautiful examples of colored photos can be found in our article “Let's give it a go to colorize black and white photos online with Klimbim”; the work of this woman amazed everyone by the quality of the applied photo restoration services. Some photos look very natural.

Curious doctored photograph of the life of the Italian cruel ruler. Benito Mussolini was the biggest admirer of horse riding. Thuswise irrespective of whether the Duce was, a horse was immediately brought to him that he could tack up the horse. Take, for example, Mussolini's photo in the saddle, which was made in 1942 in Egypt, but all the outsiders were deleted from the picture to give Mussolini the braveness. The photo manipulations touched the horseman holding the animal for the reins, so that the horse did not kick and drop a duce swinging sword down.

In the days of the Civil War in America photographers and retouchers knew how to get doctored photos from three origin photos. The given photograph was boring too, but politically correct.

In 1864, the northerners needed something that would raise their morale and an image of one of the protagonists of the war General Ulysses Grant is served for this, later he became the 18th US president and adorned a $ 50 currency note. Since it was not easy to catch a general at the right time, in the right place and on the right horse, the photographers resorted to photo combining. Ulysses's head was taken from a photograph where the general peacefully leaned on a tree, but it was attached to the body of another spirited northern man. And finally, the resulting image was laid on the illustration of the camp with captive Southerners.

Maybe this is one of the most famous fake and doctored pictures that were showed up on the web. Many people believed that this photograph was taken from a camera found in the ruins of twin towers, but only afterwards people realized that it was a fabrication.

10. Hercules is the biggest dog in the world. This shot is one of the famous Photoshopped images, which flew around the Internet. Although the biggest, tallest and the weighty dogs, undoubtedly, deserve to search them in Google and look at them, you cannot find the dogs from this picture.

Who knows how many more such doctored pictures exist that await the exposure?

In USSR, the best masters of the photo retouch worked not only in the film industry, but also on the propaganda machine. As a result, quite reliable at first sight soviet doctored photos turned out. Photo retouchers in the Soviet Union processed official photographs, made changes to previously taken photographs to bring them into line with the demands of the political regime, and erased people from images who had become victims of repression. And today on the Internet you can find a whole bunch of doctored photos and their exposing originals. 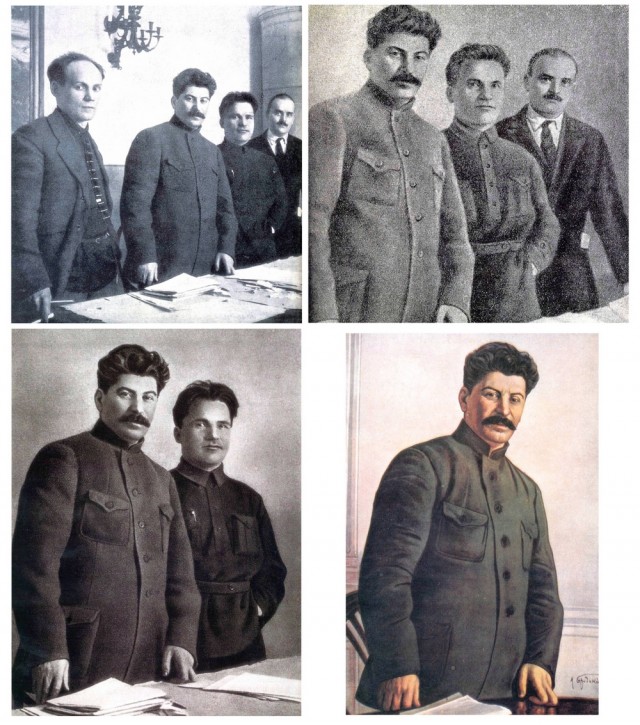 British writer, designer and completist David King get interested in pictures of the Soviet era in 1970, when he first visited the Union. At first his curiosity was connected with the fate of Trotsky. But, starting to collect photographs of a revolutionary figure, to compare the originals that could be found in the West with doctored pictures, King was interested in the fate of other Soviet leaders who disappeared from photographs. The soviet doctored photos, collected over the years, King published in the book “The Commissioner disappears. Falsification of photographs and art in the Stalin era”. 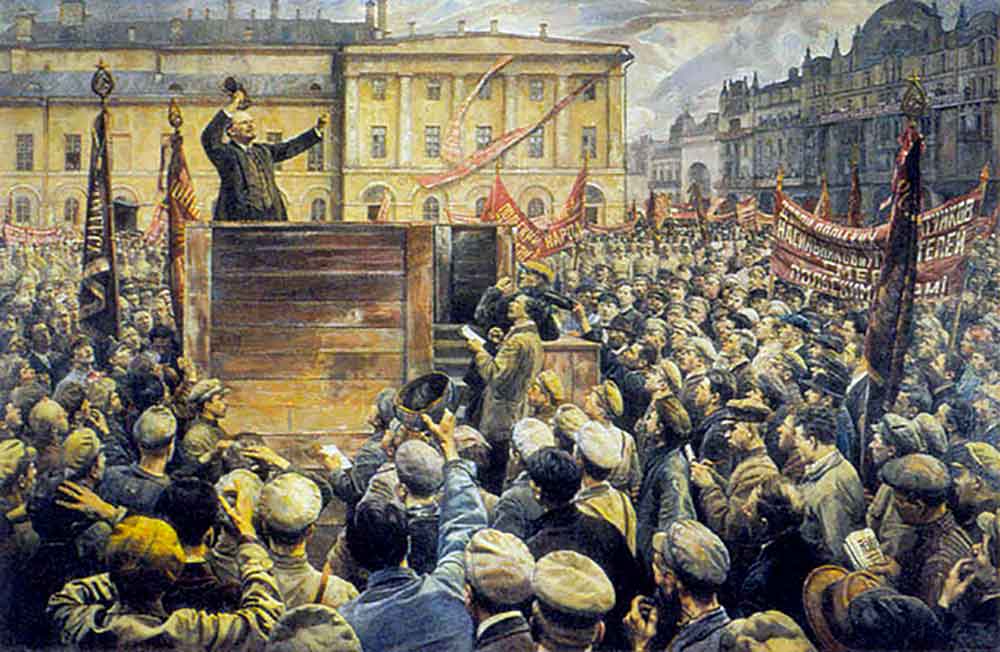 Applying tools that now seem utterly naive, Soviet-era photo retouchers have done everything to make pictures of “once-famous personalities disappeared”. This performance was carried out by art departments of publishing offices and required dexterity in the equipment with a scalpel, mastic, paints and air brush. On some examples from the work “The Commissioner disappears” we offer a look below.

1. The production and doctored photograph is “The Banner of Victory”.

This photo of Yevgeny Khaldei “The Banner of Victory over the Reichstag” is an entire production. The pictures were taken on May 2, while the banner was hoisted on April 30th. Khaldei, on the instructions of the TASS Photo chronicle, took photographs when the street fighting was over and Berlin was completely occupied by the Soviet troops. The photographer asked the first soldiers who met along the way to pose. Banner of the Khaldeans generally brought with him. And now find one small but ideologically important difference...

The officer in the original picture has a watch on both hands. In the editorial office, Khaldei was forced to erase the “extra” watches before the publication of the picture, which he did with a sewing needle.

Composition “Stalin and drummers” for the album "Drummers" of the 1930 edition points to that Stalin was clearly pasted from another photograph in violation of perspective, and some “drummers” were generally cloned. Readers can play an exciting game, looking for recurring faces. 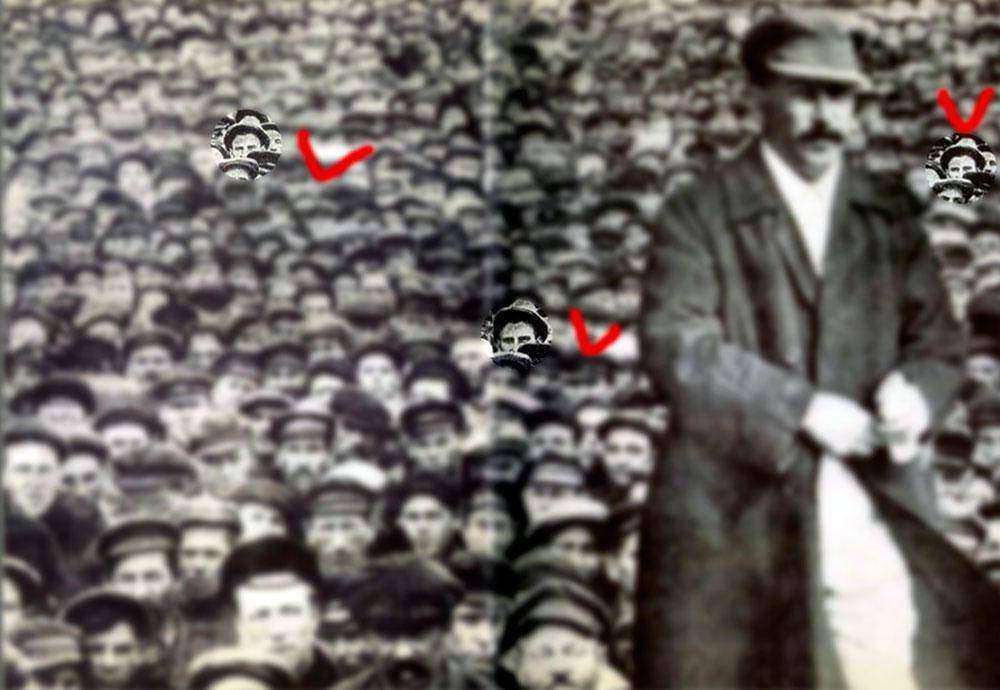 For those who prefer to live boring and uninteresting the answer is in the bottom photo.

3. There was a man and he disappeared

In this picture, Stalin strolls along the embankment (most likely this is the construction of the White Sea-Baltic Canal) with Yezhov, then the Commissioner of State Security. The photo was taken in 1938, and was published only in 1949, while the retoucher removed the “enemy of the people” Yezhov (the extreme right), shot for attempting a coup. 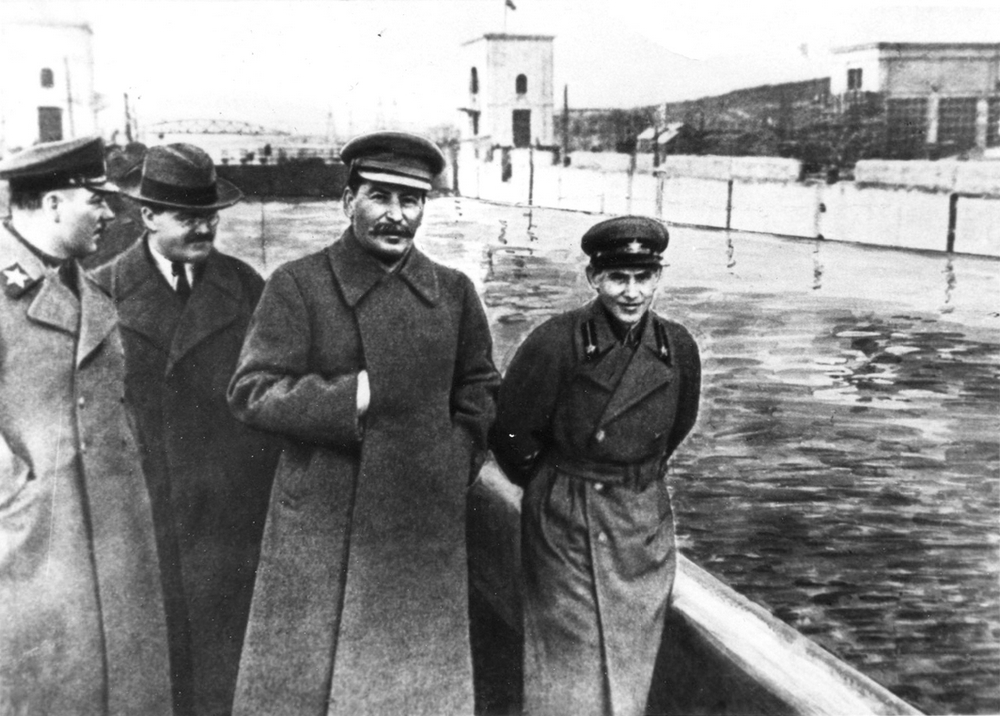 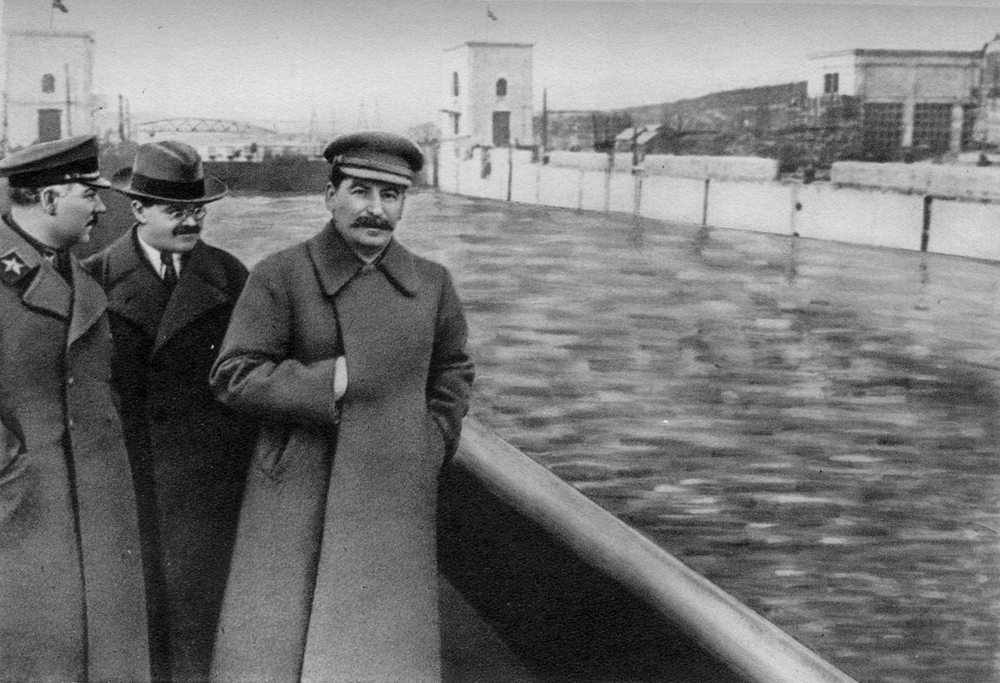 The practice of photo retouching has spread to the USSR space field content, wrote James Oberg in the magazine “Wired”. Among the cosmonauts who were blurred out from history, was Valentin Bondarenko, who lost life in a fire before the first flight into space. Also now, on soviet doctored photos, we see how Grigory Nelyubov (pictured above), one of the most promising members of the first detachment of Soviet cosmonauts, was removed from the photographs. 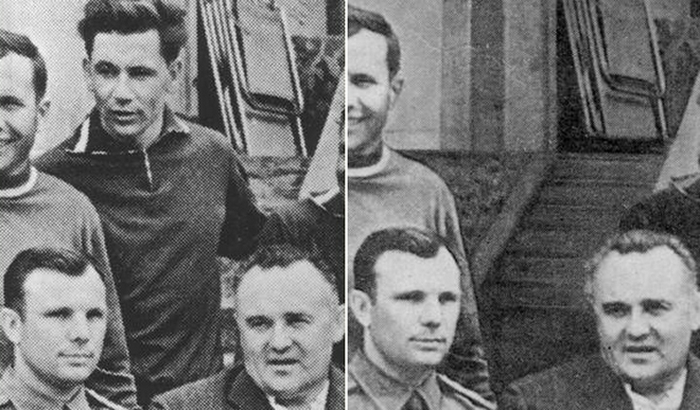 Of course, no one erased Yuri Gagarin from the pictures. He was proud of the whole Union. But even over the photos with the first spacemen of the planet, sometimes manipulations were made. Here we have an example of this doctored photograph, where Yuri Alekseyevich shook hands with Sergei Pavlovich Korolev, the employee was removed from the cadre in the background. He was hardly a major historical figure, but still existed. 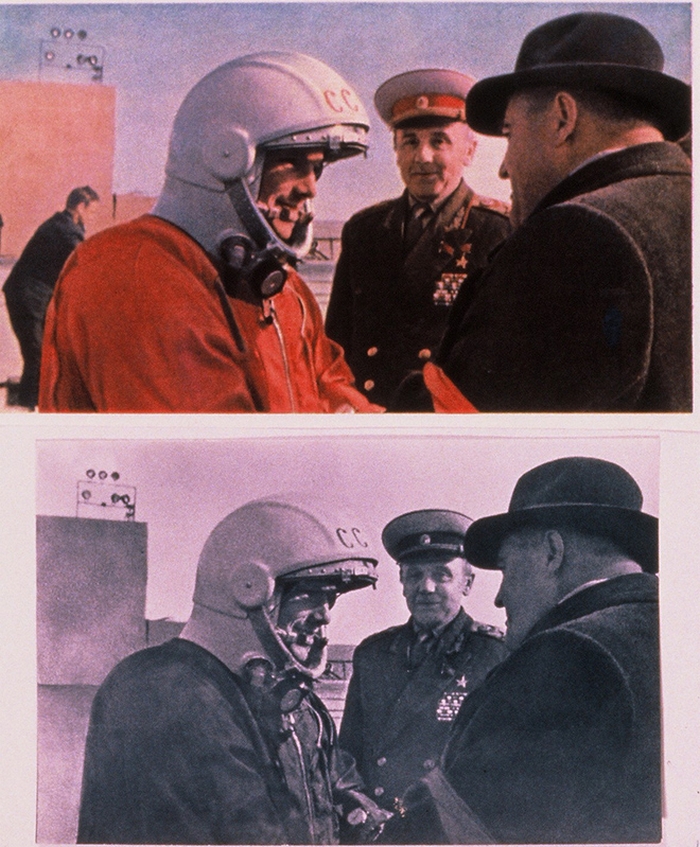 Each photo, even if it is artfully retouched, carries a historical value, reflects the fashion, the atmosphere of those times, like those doctored pictures that we showed you. But there are a lot of famous photos in the world that remain popular so far, you can see their selection here “Most famous photographs and the history behind them”.

If you also have old photos of relatives with unwanted objects or objects in the frame, our specialists will also help to gracefully retouch photos at acceptable photo restoration prices, only using modern methods. As we have seen, photographs are history, and history must always be remembered, despite the fact that everyone has their own.